Xenon Groove Synthesizer is a software synthesizer app produced by Icegear and available in the App Store for £2.99.  It's a full-on 68.6 MB download, containing 3 different types of software synthesizer, a drum machine, sequencer, mixer and effects along with hundreds of sound presets.  Its main selling point is that all sounds are produced via software synthesis meaning no samples are used.  Everything is done by pure mathematics and everything can be changed in real-time, while a song is playing.  Does it live up to these high standards? 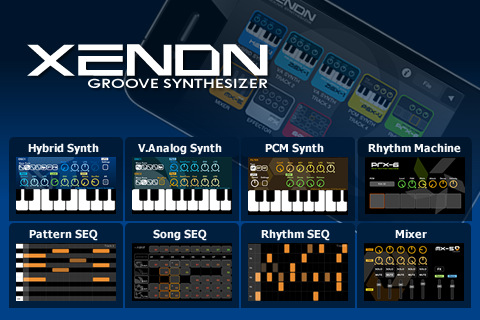 This is a review of version 1.6.0 and contains:

Icegear have made the decision not to make their Xenon Groove Synthesizer look like an actual piece of hardware from a studio and have instead opted for a very clean interface.  Knobs and dials are purely made of a thick circle and the on-screen keyboard is big and chunky and satisfying to use.  It's all very pleasing and immediately gives you confidence.  It's almost like a Fisher Price music box but don't let that glib description mask its intentions - this is a genuinely useful music tool. 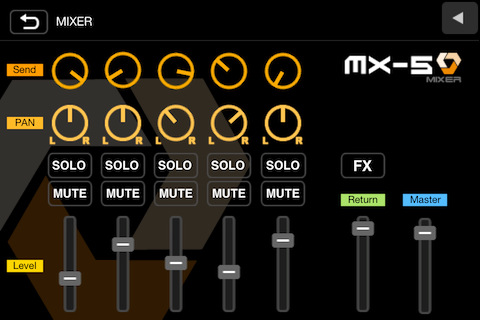 The home page gives access to the different synths, rhythm box, sequencer and mixer.  Along the top are shortcut keys that are constantly displayed allowing you to jump into any of the sound modules at any time.  This context-sensitive menu bar changes according to which module is currently being worked upon.  For instance, options for cutting, copying and pasting patterns appear while in the sequencer module.

For each of the sound modules (except the drum box), there is a piano keyboard located in the bottom quarter of the screenn  It's decent enough and is just like any of the other one hundred bazillion piano apps available for the iPad.  It can be resized and the octave can be changed by flicking to the left or right.  On the largest size, it's just about possible to play like a real piano, albeit with only one octave showing.  'God Save The Queen' perhaps? (a techno, techno, techno version though).  It's nice to be able to change any of the sound parameters and hear it instantly by tinkling on the piano.  That's *playing* the piano, not relieving oneself on the ivories. 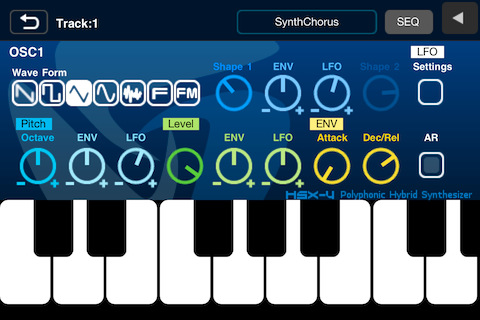 This is a polyphonic synth, that is, multiple notes can be played at once.  There are 4 pages of settings that can be applied to any of the included 210 factory presets.  The settings include sound shape, filtering, LFO and many more.  Only two pages of setting are shown at any one time with the extra pages accessed via a quick swipe.  The preset factory sounds are reasonable enough and remind of the kind you get in a high-end home electric keyboard.  They are quite retro-sounding and this fits in well with a current trend in popular music for that kind of tone.  How it will fare in years to come is another question.  The polyphony extends to ?? number of keys at once.

The hybrid part is derived from the second sound that can be played alongside the first, with its own set of parameters.  This makes the module much more powerful and versatile when it comes to creating new sounds.

Very reminiscent of the mighty Moog, only one note can be played but there are two of them, played and programmed independently.  Again, different pages of options can be accessed by swiping.  The sounds are perfect for deep, crunching synth bass lines.

This is a much simplified version of the HSX-4 above.  Only one sound is played (still polyphonic though) and has a limited range of parameters to change.  108 different sounds to play with though.

A drum machine by any other name, this ia a good implementation.  Normally, these type of things are crippled by horrible latency but the sounds here are instant and very crisp.  There are plenty of kits to choose from, the ubitquitous TR808 and 909 drum machines being two.  There are also presets such as House, IDM and RnB.  Individual drum sounds can be applied to any of the 6 pads, in deference to the kit they are in.  A neat touch and allows custom kits to be created. 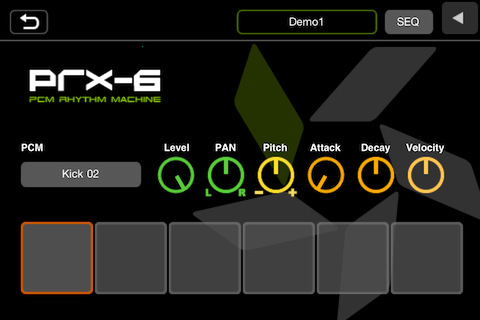 MIDI is supported through the iPads camera connection kit.  Unfortunately, I don't have a camera connection kit so if you'd like to buy me one, I'll be more than happy to update the review.  While you're out buying me stuff, you may as well get me a keyboard or other MIDI-enabled device to connect it to.  And a new car please.  My car is rubbish and the plastic trim has come off the window.  So, to recap, send me a camera connection kit, a keyboard, a new car, a cuddly toy and a big sandwich with lots of cheese in it.  Come on, hurry up ...

Having been used to other sequencer-type bits of software, I felt immediately at home here.  A sequence, or song (or composition, or tune, or whatever) is made up of 'patterns'.  These patterns are at the sound module level and consist of notes placed onto a scrolling piece of musical notation, rather like an old-fashioned wind-up music box.  Patterns are placed into the structure of a song by selecting one from those available and then tapping onto the module track where you want it to go.  Very easy.  It has the usual standard editing features too such as copy and paste.  Individual patterns can be exported as a WAV file, maing it extremely useful as a musical 'doodling' app then exporting loops into a bigger package. 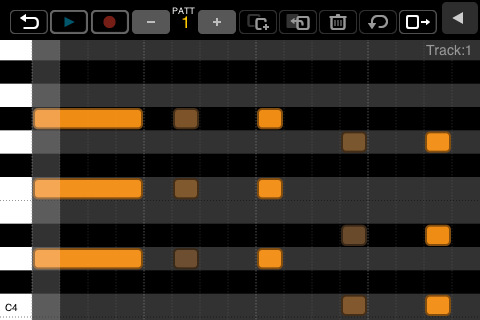 This key component of Xenon Groove is very intuitve but there are a couple of niggle points.  Scrolling the song track along means having to 'grab' a very small strip along the bottom with ones finger and this proved quite fiddly.  Secondly, it took me a while to realise each track can be toggled off by tapping to the left of the track.  As the track headers are all in shades of gray, I didn't realise I had turned it off.  Took me ages to figure that one out.

It comes with its own in-built help document, probably PDF but is hard to tell as it's in its own reader.  It's written in a weird kind of broken English and if I didn't know any better, it's as if Yoda, the little green Jedi Master from Star Wars had written it.  An example:

"Thank you for purchasing the Xenon.  The Xenon is designed to compose the music, make the sounds easily for iPad."

It's still understandable though and it's a very comprehensive manual, with lots of pretty pictures.

IceGear have played a blinder by breaking free of the normal convention and presenting an interface that makes use of the iPads capabilities as opposed to modelling it on a piece of static hardware.  This allows them to present many more options than would be available on a piece of electric gadgetry, easily anyway.  It reminds me of how a beatbox such as a Korg iElectribe would be if it were re-done as software (as opposed to a software reproduction, of which the iElectribe already has as an app).

The mobile app market is being flooded with loads of software synthesizer type apps but what IceGear have done is to combine them into a cohesive whole where the sum of the parts adds up to much more than it should.  Individually, each of the different sound modules would drown in the sea of dross out there but when plugged together like they are here, they work really well.  It's so geeky it's untrue and at £2.99 it's an absolute bargain.

Posted by PapasWorld at 8:10 AM