Scarecrows are scary - fact.  That's why they use them to scare crows away from crops and other stuff.  So a horror film based on one is a good idea, isn't it?  Well, yes, by and large.  It isn't a new idea, scary scarecrows that is, so it's down to the telling to give us a fresh spin on the yarn.


Six dumb teenagers crash their vehicle in the middle of nowhere, surrounded by cornfields.  When they awake from their post-crash concussion, one of their number is missing and the inevitable search within the indomitable fields of sky-high corn leads them to a scary stalking scarecrow.  Borrowing elements from a number of movies such as Blair Witch (eery deserted and scary house), Children of the Corn (big scary cornfields), Jeepers Creepers (invincible killer with scary mask) and a few others, Husk ticks every box.  Stupid American teenagers making lots of bad choices and illogical decisions? Check.  Lots of opportunities for jumpy scares? Check.  Enigmatic, scary serial killer? Check.  Stupid aliens landing in cornfields? Erm, no, we'll leave that to Signs eh?

At only 79 minutes long, we're not going to get an in-depth character study or Byzantine plot developments but what there is in such a short space of time is pretty good.  The back story is told through (conveniently-placed) expositional flashbacks along with some pretty big assumptions made by the mainly dumb cast of unknowns.  It just about clunks its way through the plot.

The setting works well as the cornfield provides a good foil for things to jump out of.  The claustrophobic elements are effective and the sense of danger lurking in every corner is palpable.  It didn't need to take place at night however as the cornfields are foreboding enough without having to add another layer of darkness. 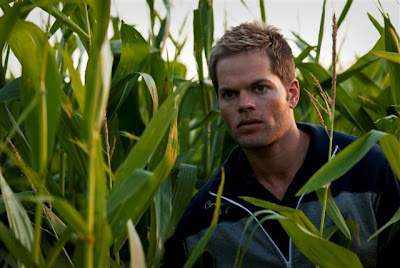 We're not too bothered about the characters, with most of them being entirely unsympathetic.  The obligatory nerdy-type is perhaps the one most people would lend an sympathetic ear to but even then, his stupidity knows no bounds.  On a limited budget, you'd expect limited acting skills but here, the 'stars' do shine in their own way and play to the parts well.  The story is plot-lite, it has to be said.  In 79 minutes, it couldn't be anything else and like Father Dougals sweater, it would be so (very) easy to pick gaping large holes.  But we won't except to say, 'Stay in the goddam house until daybreak'.

We did like this film and any piece of 'horrific' entertainment such as this that can elicit gasps of surprise is on the right track.  With its 18-rating, we were expecting much more gore and scares though and we thought the finished article was no more than a 15.  There was minimal swearing (bollocks), no nudity (boo) and the gore was mainly left to the imagination.  Where 18 came from we'll never know.  It WAS very jumpy though but the ending was 'meh'.

Posted by PapasWorld at 7:18 AM No comments:


I'd love to be Michael Bay.  Even the mundane, such as going to the toilet or washing a mouldy cup in a canal can be enhanced by the addition of slow-motion explosions, pretty women wearing lots of lip gloss and big f**k-off transforming robots.  It would be like, well cool.  So, this review is in the style of Michael Bay.


In the pre-production meeting for T3, Michael Bay slams his fists down onto the desk and says: "F**k this, I want bigger 'bots, MORE f**king 'bots and a f**king 'bot that can eat f**king high-rise buildings.  You got that you lousy f**king c*nts?"

"I'll stop you there.  I don't care of the f**king cost.  Get me a f**king robot that can eat buildings and I won't rip off your head and sh*t DOWN YOUR F**KING NECK".

But do you know what?  That same f**king robot sh*t never seems to tire.  I'm not averse to seeing lots of robots kicking each others ass or a big-ass drilling robot eating a f**king high-rise building or men flying through a city scape like f**king flying squirrels (and not even the robotic kind of flying f**king squirrels either).  THAT kind of freaky f**king robot sh*t NEVER gets boring.

There's a plot here somewhere and is something to do with a crashed vehicle on the Moon that contains Sentinel Prime.  HE just happens to be the 'bot equivalent of Anne Robinson, a gnarly old p*ssed off mutha-f**ka who wants to save his race of diseased machines and return home to Cybertron.  In there, Sam Wickwicky and his new uber-hot perma-glossed girlfriend (Megan Fox jumped ship after the second) manage to shoe-horn themselves into the whole shebang and of course, all the old favourite auto-bots crop up to save the f**king day.


But it all amounts to nothing until along comes Optimus Prime and f**ks sh*t up big time.  That's the sh*t we want to see and T3:DOM doesn't disappoint.  Lots of alien robots f**king about, destroying cities, destroying each other and lots of humans in the process.  F**k yeah.  Now they've got big f**king flying mega-ships that can cut buildings in half.  F**k yeah.  And that drilling worm-bot sh*t, that's f**king well f**ked-up sh*t that.  F**k yeah.

There's even the totally magnificent John Malkovich in there.  He f**king rocks man.  Best actor ever?  F**k yeah.  Even Francis Mcf**king McDormand from Fargo crops up as a big f**k-off spy boss.  I've just f**king j*zzed in my pants and we haven't even got to the robots where they f**king destroy a whole city.


What can come next?  "Right you f**kers, we're doing T4.  I want to see an Autobot that can eat the whole f**king galaxy and sh*t out planets.  I want to see it in all it's high-def glory.  And Sam Wickwicky's new girlfriend?  Get me Beyonce on the phone and plenty of f**king lip-gloss.  Don't say no to me, I swear to f**king God almighty, you don't want to say no to me or I will f**k you up big time ..."

Posted by PapasWorld at 7:23 AM No comments:


Posted by PapasWorld at 8:31 AM No comments: