Murder, incest and expensive jewellery.  And so begins the Atlas of Empires, Peter Davidson's quest to explore empires that have defined history, from marauding Mongol conquests sweeping all away in front of them via a tithe of 500 eunuchs in Assyria payable to Cyrus the Great of Persia to the Treaty of Tordesillas as it drew a line through the Atlantic ocean, claiming the New World for Portugal, and much more before, between and after. 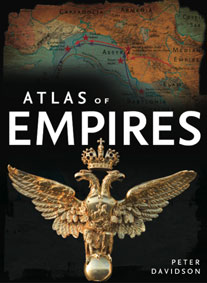 In his introduction, Davidson sets out his ambitions for the book.  Exploring only what he considers to be the most influential empires of the last 5000 years, Davidson can provide just a cursory glance at these civilisations, some more than others.  By investigating a wide variety of historical conquests, the book states it is trying to find a common factor that defines an empire and more specifically, the causes of it's rise and subsequent decline.  For each empire, Davidson has defined three factors; the core, the periphery and the international situation.

The core refers to the motives and dreams of an expansionist state.  Perhaps it's to impose an imperial peace or exploitation of economic and ecological resources such as in the case of the Persian empire run by Cyrus the Great, several hundred years before the birth of Christ.  Quite often it's simply for the glory of conquest based on an evangelically religious or idealogical zeal.

The periphery is the most important point, Davidson argues, as the collapse and decline of an empire is based upon resistance and collaboration between satellite states and the effect this has on the ruling bodies.  The international situation also comes into play as far-off districts are annexed by rial clans, armies or even just insurgents with differing ideologies.

There are 9 main chapters, each following a very rough chronological order but with some degree of crossover in the periods each time-frame covers.  The earliest recorded empires such as Sumer and Egypt fall under 'War and Peace', a time when peace was the over-riding motivation.  Farming and agriculture was in it's ascendency and textiles and pottery became currency to be traded with other lands and countries.  Trade routes were established and competition for natural resources such as timber and minerals became fierce.

In those early, fledgling years of civilisation, the overwhelming surprise for myself as a reader was the level of organisation and administration undertaken to keep those empires running.  Communication was vital and roads and routes were carved, in many cases, out of harsh, arid desert.  Taxes, as today, were a vital component for any empire to flourish but more than that, they provided money to fund armies and build new weapons to expand the empire even further.  The Sumerians circa 3000BC needed cooperation to ensure their survival and a disparate network of villages were eventually joined by huge construction projects that channelled perhaps the most important resource of all; water.

Better irrigation led to better harvest and in turn, this led to taxation and bureaucracy controlled by a central administrative rule.  It seems this earliest of empires grew almost by accident.

It's only because of internal strife and border disputes between villages and hill-tribes outside of the region did Sumer begin to decline.  Endemic warfare spread over hundreds of years allowed it's edges to become ill-defined and the cooperation that enabled it's prosperity, soon became it's downfall as a succession of would-be emperors tried to impose their own martial rule.

And so it goes on.  Sumer gives way to Akkadian, Urukkian and Urian empires, spreading over hundreds of years. In a case of divergent empirical evolution, Egypt rose out of the desert like a flower in bloom, a unified country and military state borne out of a precipitous invasion by Narmer.  The populace were subjugated for sure, but trade routes were also established to Lebanon and further afield.  The desert provided protection, a wall without walls if you like and incursions by warring neighbours rarely troubled the ruling deities (for that's what they were perceived to be by their people).

The book progresses and in its wake takes in the classical empires of Rome, Alexander the Great, China and India.  Each are fascinating capsules of history with perhaps five or six pages devoted to each; a nice, easily-digested amount.  The maps and increasingly as time marches towards the present, colour plates from classical literature, archeology and literates of the time, depict monumental scenes such as a clean-cut Alexander and his horse Bucephalus fighting Darius III or the far-reaching tentacles of fear by the murderous Mongol hordes.

For myself, the most interesting chapter of the book has to be the so-called Empires of Isolation such as the Incan, Aztec and Mali empires.  While the European empires encompassed whole continents, the Mayans for example were building huge cityscapes and again, thanks to another case of independent evolution, erected their own pyramids, built canals and dykes and ditches.  They also believed in human sacrifice to ensure the cyclity of their seasons and innovative calendars and were not adverse to cutting out the odd heart for their Gods to consume.  They were a blood-thirsty lot and victims for sacrifice were part of the tithe payable to Tenochtitlan, the major force in the Mexican valley around the 12th, 13th and 14th centuries.

The whole South American continent has been under human civilisation for thousands of years and it's only when the Spanish arrived in the 16th century carrying diseases the Aztecs and Incans had not encountered before and as such, their metabolism didn't have the required antibodies and so were swiftly defeated.  They left behind huge treasures which the Spanish plundered vociferously, a rape of a continent that still has far-reaching consequences today.  A plate from the Codex Mendoza of c. 1540 is included and clearly shows the collection of victims for human sacrifice.

The book covers the truly global British Empire in what is known as the High Age of Imperialism encompassing colonial India and Australia.  Of course,  the British failure to keep hold of North America in the American Civil War is included, another fascinating area of reading.  Weapons technology is at the fore-front of any empirical conquest, witness the swords of the Japanese Samurai and native American falling prey to the western revolver or the mobile hordes of the horse-bound Turkish Ottoman driving their influence through the foot soldiered ranks of the Greeks.  It was only thanks to the head-spiking antics of Vlad The Impaler were they stopped from rampaging Northwards.

Just a final note.  The final empire Davidson rests his investigative pen upon is none other than perhaps the most powerful of them all, the current European Union, under whose umbrella we find ourselves residing in.  Will it suffer the same fate as all those before it?  Only time and future history will tell.

It's a quite beautiful book and given it's trying to encompass the entire known-history of man, it manages to fit in a decent amount of material.  Running to 240 pages with a comprehensive index, further reading sections and acknowledgements it's not a massive tome but as an introduction to periods of history that would otherwise remain resolutely impenetrable to all but the most hardy of scholars, it's a great read and highly recommended to anyone with just a passing interest in history.  It's well researched, confidant in the delivery of facts and nicely written with an easy-reading, engaging style.

This being an atlas, maps or pictures of some sort would be conspicuous by their absence.  Luckily, there are over 60 full colour, highly detailed maps that illustrate the scale of each empire, the resources that were plundered within, political and socio-economic regions and much much more.  These maps and pictures are marvellous it has to be said, and they fill in huge swathes of information that could not be covered due to the limited scope of a textual description.  They bring the history alive and they certainly help when trying to visualise the scope of authority an empire extends to.  Not only that, they show the paths of trade and commerce or lines of attack.  The chapter devoted to Napolean for example demonstrates the routes the diminutive dictator took in his quest for European domination.

It's easy to get bogged down in detail with a book such as this and before long, the review would be recanted into something resembling the book itself.  Suffice to say, the early empires were the hardest to follow with names, places and religions being distinctly unfamiliar, especially to an historical layman such as myself.  Davidson's attempts to distill this epoch of history, while an admirable effort, still require an element of further reading and study.  It spans huge periods of time and human endeavour, particularly in the fields of warfare, agriculture and technological innovation that are glossed over.  Within the context and scope of the book this is fine but as a work of reference for serious study it is not.

More importantly, has Peter Davidson accomplished what he set out to do?  I believe he has.  By examining the rise and fall of each empire, he comes to a conclusion of each.  Sometimes it's greed, sometimes it's over-expansion, often there's a ruling weakness, but nearly always it involves murder, usually incest and expensive jewellery as a de rigeur item for any budding Emperor.

Priced at £17.99 and published by New Holland Publishers.

Posted by PapasWorld at 7:05 AM