In 2001, Steve Jackson Games released a card game called Munchkin that promised to deliver a Role Playing Game without all the role playing nonsense that goes with that moniker.  It's a fun, irreverent, simple game to play and it was so well received, SJ Games decided to release a board game based upon the same simple mechanics and wacky humour. 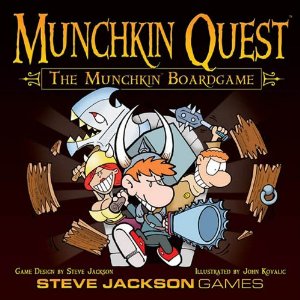 Munchkin Quest was born and while it carries on Munchkins legacy of lampooning the Dungeons and Dragons ridiculousness, the rules have been tweaked somewhat to accommodate a modular board, roaming monsters and lots of lots of treasure.  You can still steal said treasure, you can still kill monsters and you can still stab your buddies in the back (while stealing their treasure).  Good, then.

The first player to reach level 10 who can then reach the exit by defeating a big ugly monster is the winner.  This is achieved by exploring the dungeon, killing monsters and finding treasure (did I mention and stabbing your buddies in the back?).  Wholesome family fun.

What's in the box? 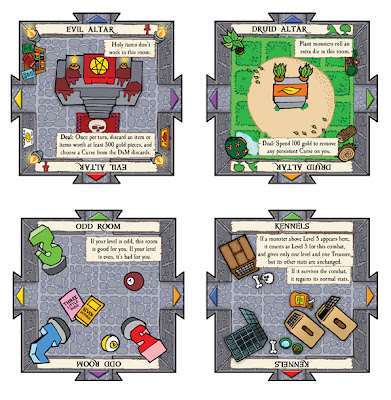 Each players turn is split into these phases:
*Draw a DxM card
*Movement which can be Exploring, Fighting, Dealing or Searching
*Charity

Then the monsters move.  Run away, fast.

In the original Munchkin card game, the allegory of exploring a dungeon was explained by turning over a door card.  Here, this is taken further by placing a large, well-illustrated dungeon tile onto the playing surface.  All the players in the game start at the entrance room (that also serves as the exit come the end of the game) and from here, doorways lead to as-yet unknown parts of the dungeon.  In the board game world, this is known as a modular board and as the next room to be explored is totally random, every game is different.

As a player moves through a doorway, a new, random dungeon room is attached to the board and a new monster is generated, represented by a small (or large, depending on the monster) cardboard chit that is slotted into a coloured plastic base.  It would have been nice to have properly sculpted plastic models for the monsters but as there are so many other components in the game, the cost would have been too prohibitive.  As it is, the plastic player models will have to do (as nice as they are).

On their turn, each player has a 3 movement tokens that can be used to move between rooms, fight monsters, search for treasure or deal with other players.  Movement tokens can be added during the course of the turn as long as the DxM or treasure card allows it.  Each room has a set of icons on it and / or additional rules that can affect things like combat and searching.  Rooms can be ransacked and looted, depending on the results of a search look-up table.

Combat is very similar to the card game with a very simple level comparison to item bonuses plus the players level and, new for this game, a roll of the dice.  Other players can still throw in cards that affect the combat, either to help or more likely, to hinder you and reduce you to a pile of smoldering ash (should you be facing a level 20 Plutonium Dragon, that is.  If it's just a potted plant (really, there is one), you can put your hands on your hips, stick out your chest and laugh like a Crunchie bar).

Monsters are controlled by the players but really, this amounts to little more than moving them around the dungeon in the monster turn phase or rolling dice for them in combat.  An extra card is drawn from the DxM deck if a player's monster is mercilessly destroyed. 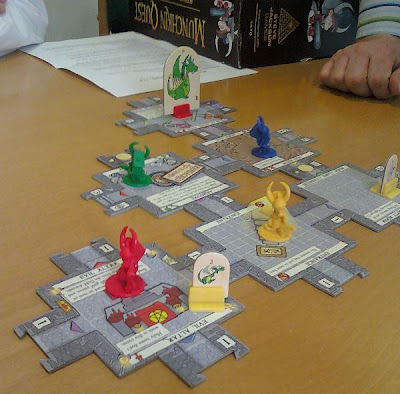 Bad bits
The rules, understandably, are much more complex than the card game and with it, the length of game has increased somewhat.  It's much less fast-moving than before and with 3 movement tokens per turn that can also be enhanced, we found each player was taking up to 20 minutes per turn.  This is a *loooong* wait between turns.  Of course, this is offset by the ability to take part in combat as well as (randomly) taking control of monsters that appear.  The 3 movement tokens also mean a player going first has an advantage when it comes to building up their character quickly with armour, weapons and such-like.  With four players, we have yet to play a game under two and a half hours.  The first game took a mammoth 5 hours to get through with lots of rulebook lookups.

Taking your turn last is a distinct disadvantage.  A few games now I have gone last and only managed to move my Munchkin character twice before the game has ended and before I could make any meaningful contribution.  Quite frustrating, it has to be said.  This is also down to the amount of card-drawing that takes place.  There's a lot, much more than the card game strangely enough and this leads to the early players gaining huge amounts of advantageous loot.  Again, my mate Tim seems to attract all the best gear, the worst monsters and wins every single game.  He cheats, I'm sure of it.

The artwork is fantastically drawn by John Kovalic and the dungeon tiles are very colourful with lots of detail.  This is in stark contrast to the Dungeons and Dragons game Castle Ravenloft where the dungeon tiles are drab, grey and boring.  Here, they really add to the atmosphere and that irreverent humour runs throughout.  Witness one of the dungeon rooms called 'Ye Olde Shoe Shoppe' where female players get a bonus for exploring.  Nice.

The extra rules and subsequent complexity make for an absorbing experience.  The original Munchkin always had more depth than the simple rules would imply and Quest extends that with more rules than you can shake a rat on a stick at (a rat on a stick being a weapon in the game).  The cards and rooms extend the rules themselves so the game feels much more organic and unstructured than say, Monopoly.  If you dress up in funny little costumes and wear some tin-foil armour, you could imagine yourself actually in the dungeon.  Don't walk home after the gaming session like that though as you're only asking for trouble.

It's a genuinely fun game to play, as all Steve Jacksons games tend to be.  While the whole idea of a modular game board that is never the same twice is not new, SJ Games have sprinkled some of their Munchkin magic over it.  The numerous components are excellent quality with the tiles being of thick card-stock and even the playing cards have been pimped up with a nice, pleasing shine to them.

I would have given this game 5 stars but the extra complexity means it has a far-less reaching appeal than say, the original Munchkin card game and so dropped it for that reason alone.  I would say anyone over the age of 10 should have no problems but do expect lengthy games at first, certainly before the rules become second nature.  It's still a mighty big blast of fun though and far (far) less complex than the  'official' Dungeons and Dragons games tend to be.  D&D Lite, if you like.

It has elements of arithmetic, reading, forward planning, strategic thinking and downright cunning and nastiness, especially when there's treasure involved.

When it comes to expansion sets, Munchkin Quest is not lacking and since its release in 2008, there have been no less than 2 expansions, a spare parts pack and numerous special edition components released.  Expect to pay around £35.00 for the base game and between £20 and £25 for the expansions.

Posted by PapasWorld at 9:08 AM