Don Aprile has retired, no longer a threat to anyone, but is shot down in front of his children and grand-children while attending Holy Communion.  As his nephew Astorre tries to piece together the killing, he stumbles across a danger not only to the rest of the family but one that could destabilize the whole world. 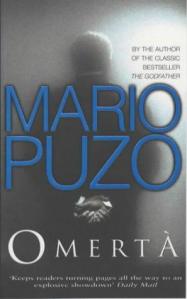 This was Mario Puzo's penultimate novel before his death in 1999 and was published posthumously in 2000.  Puzo, perhaps most famously, wrote The Godfather that translated to arguably the greatest film ever made and his subsequent books about the Cosa Nostra all follow a similar serpentine pattern.  Occupied by the Mafia, Puzo's gangster novels tell of honour amongst thieves, of skulduggerous consequences and absorbing machinations of the criminal underworld.

Omerta, which is the sacred oath sworn by Mafiosa promising never to 'rat' on a fellow gangster, tells the tale of Raymonde Aprile and his three children.  As former head of the Aprile crime family who has now retired from the mobster scene, his children are in legitimate well-regarded employment and it's down to his nephew, Astorre to sweep up any problems that may arise from the criminal past.

As is typical of a Mario Puzo novel, the plot twists and turns and nothing is as it seems.  The disenfranchised family (from the Mafia culture at least) is targetted by vengeful, greedy minds and the level of corruption climbs high into the upper echelons of the very people paid to protect and serve.  The power brokers want their hands on the vast legacy left by Don Aprile to his children and will stop at nothing to get it.  Astorre has to navigate himself around contract killers, corrupt police officials, shady FBI double-dealings and murderous drug-dealers.  It's a delicate balancing act and one slip either way will result in unconceivable failure for himself and the family he has sworn to protect.

In Omerta, Puzo explores similar themes to his other Mafia books.  Those of redemption and retribution feature heavily and while Omerta treads the same path as The Last Don (1996) and The Godfather (1968), Puzo acknowledges the end of the old-style Mafia Don whom is being replaced by ever more ruthless career criminals, if that were possible.  Set against the real-life backdrop of massive FBI investigations that imprisoned many of the big Sicilian families making a dishonest living in America, it's a recognition that that kind of life is slowly dwindling away.  Moving in to fill the power vacuum left by the departing Dons are drug lords from South America and the massive wealth generated from the international drug trade is the new gambling, loan-sharking and racketeering.

Puzo's writing style is fast-paced and engrossing and each character is given a rich heritage of background material.  The tapestry he weaves is often convoluted but well-sewn and individual threads are neatly wrapped up by the thrilling denouement.

A criticism would be the bad guys here have *too* much free licence to do what they want, especially in light of the FBI's interest.  Certain lazy plot devices smack of Deus Ex Machina, diplomatic immunity being one.  The mystery is revealed very early on too and what could have been a who-dunnit story of political intrigue and subterfuge turns into Puzo's well-explored areas of revenge, damnation and fateful justice.  It's good but we've seen it all before.

It's an ambitious story none-the-less and while never climbing the labyrinthian heights of his earlier seminal works, it still provokes enough interest for an always engrossing hidden layer of society.

Posted by PapasWorld at 7:15 AM