Mirror's Edge is a sideways scrolling platform game for the iPad that takes it's cues from the first-person (FPS) action adventure version on the PC. It was published by Electronic Arts in 2010. 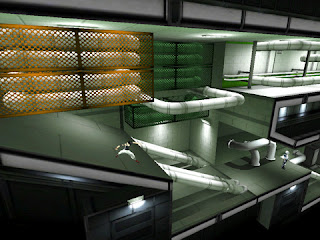 As a member of a free-running gang in a dystopian future where information and media is controlled by a fascistic, totalitarian government, these daredevillian stunt artistes are the only free-voice in an otherwise cowed and submissive society.  The story follows one runner in particular as she moves from one showdown to the next, leaping between high rise buildings, dodging police bullets and clambering up walls with apparent ease.

Movement is controlled by gestures on the iPad screen with an upwards flick making the character jump, a downwards flick will make her slide along the floor and in between, there are numerous other controls that are subtly introduced throughout the game.  This makes for very fluid gameplay and it's very easy to pick up.  Really it's a case of performing the right gesture at the right moment and in a lot of cases, there's a large margin of error.  That's not to say it's easy as it isn't but it's nowhere near as difficult as say China Miner, that venerable classic from the C64 days.

Graphically, it's more Prince of Persia than Doom with the runner in particularly being well-animated. She even does the patented little shimmy thing when changing direction.  There's a lot more to it than that though with leaps and slides and frantic grasping of concrete edges.  It flows beautifully from one move to the next and that's the essence of the game; leaping to the next platform, performing a roll, a flying kick to disable a guard, sliding down the side of a building, all with grace and balletic movements.  When it all goes as planned, it's a thing of glorious wonder. 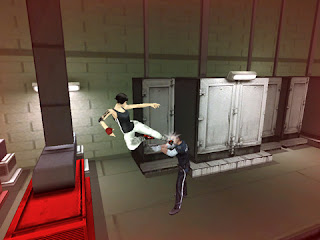 The backdrops are superb with a real dizzying sense of height and distance, especially on the outside scenes as Faith, the runner, moves effortlessly over a plethora of unfinished sky-scrapers, high-rise cranes and the perchiest of perches.  The little iPad (first edition) can cope with a reasonable depth of vision but there's still some catching up on the longer shots.  On the whole it's bright, colourful and a joy to explore.

In contrast, for the chapters set inside buildings, it all gets a little samey.  All the building interiors consist of the same few boxes lying around, steam-billowing pipes and stupid guards.  Apart from the colours, they all look the same.  Frustratingly, corridors snake off into unknown parts of the property and because of the flat nature of the gameplay, these can't be explored.

Dotted around the landscape are bags, often in hard to reach places, that provide a bonus and completion to that all-important 100%.  Often there are multiple paths to the same goal too and this provides a decent challenge in finding some of the hidden routes through the tortuous landscape.  Combat is the only real fly in the ointment, being clunky and a matter of picking one of three moves to get past your opponent as fast as possible.  This is accompanied by a purposeful slow-motion effect that is jaw-dropping at first but soon becomes irritating and hard to time moves to.

The story-line is hard to follow as the 'chapters' our heroine finds herself in are simply a case of rushing from one end of the level to the other.  There's little to link between the narration and what is happening on screen.  The only puzzles come in the form of gravitorial dexterity as multiple swipes, jumps and slides are needed as the game progresses into the harder levels.  Story elements are shown through a Star Wars-like scrolling text affair as levels are loading.  It's ok but would a little more cinematic visuals have gone amiss?  The rest of the game is very polished and these textual intermissions grate jarringly.

There's a riotously good fun 2-player split screen mode and with the iPad sat in the middle, it works extremely well with no slow-down in the frame rate at all.  The only problem is when the action gets a little heated as one player can swipe their finger onto the others area causing them to fall off a ledge or something.  I don't do it on purpose, honest.  The iPad is a great platform for two-players and Mirror's Edge is a good showcase of what it is capable of.

The sound is reasonable for what it is with little more than the odd grunt, gasp of winded air or the tell-tale thud-thud-thud of a helicopter gunship as it tries to knock you to the ground with it's 50mm cannons.  The original soundtrack is interactive and there are a couple of good electronic dance tracks but most are generic and formulaic pieces.  Also, some of the samples used are looped incorrectly and there's a noticeable gap between the end and when it starts playing again.  A rookie mistake and one expects better from a huge professional company such as Electronic Arts.

With some old-school platforming action and wonderfully fluid acrobatic gameplay, Mirror's Edge is a nice addition to the iPad stable of great games.  It has a few flaws but in spite of those, it manages to raise its head above the parapet of mediocrity.  At £2.99, it's a lot of fun, and game, for the money.  Recommended. 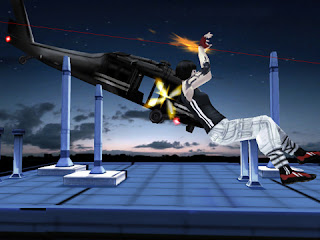 Posted by PapasWorld at 7:27 AM