Album review: Our Little Secret by Lords of Acid

This is a review of an X-rated album.  As such, adult themes are a feature of this review.  If you are easily offended, please do not continue reading and proceed to the nearest Daily Mail.

Lords of Acid are a Belgium dance music group with origins dating back to the late 80's rave music scene.  Also known as Digital Orgasm, their style can be classed as EBM (Electronic Beat Music) which is rather like a cross between Industrial Dance, Techno and Acid House.  Main vocals are provided by Jade 4 U aka Darling Nikkie aka Nikkie Van Lierop, a well-regarded music producer in her own right and one whom has contributed to several Hollywood films as well as a strong back catalogue of recording artistes.  Her voice is strong, tuneful, playful, has a wide range and is capable of producing an eclectic mix of tones.  Behind the decks, so to speak, is Praga Khan (real name: Maurice Engelen), a dance music pioneer from Belgium.  It sounds a contradiction to include the words, 'Belgium', 'Dance Music' and 'Pioneer' in one sentence but here, he does a good job of capturing that hardcore, rave music vibe.

My Little Secret was released in 1997 and is Lords of Acid third album after '''Lust''' (1991) and '''Voodoo-U''' (1994).  'Secret', like their other albums, is an intruiging mix of post-punk techno, faintly ridiculous lyrics and an overtly-sexual, often perverse sense of humour. 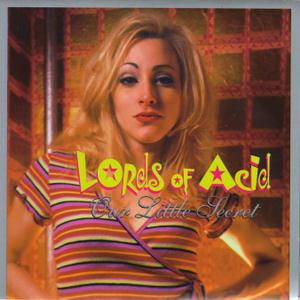 Kicking off with '''Lover''' (3'55), cue robotic breathless woman giving way to heavy 4-to-the-floor dance beats and hard, driving melodies.  _"Lover, I will come for you, Lover, anytime you want me to"_.  Ah, that's sweet of you.  It's quite reminiscent of The Prodigy around the time of the FOTL album, swirling techno synths layered over sampled guitars.  Showing off their wicked humour is '''Rubber Doll''' (3'11) which tells the tale of a rubber sex doll.  There is an over-riding arpeggiated Goa-trance melody and a basic drum-machine beat turned up to 11.  _"Her mouth is always open, ready to please, she's always quiet, she never complains"_.

'''Fingerlickin' Good''' (3'45) is one of the stand-out tracks on the album. _"Abso-f*****g-lutely, mind-blowing super sexy, so delicious, it's fingerlickin' good"_.  Dark melodic synths, grungy guitars and bass propelled forward by a nasty drum beat all combine to create a very hooky, rememberable tune.  I doubt KFC will use it in an advertising campaign though.  The pace continues and never lets up with '''LSD=Truth''' (4'10).  Hymnal voices being hi-jacked by vicious drums, screeching vocals and 808 tones.  The lyrics are pure nonsense, as you'd expect for a song about LSD.

'''Pussy''' (4'05).  _"I wanna see your pussy, show it to me"_, so shouts the chorus.  Intentionally funny, loaded with more double-entendre than a Frankie Howerd convention and sampled pussycat meowing sounds are paired up with a laid-back, beat-box melody.  What's not to like?  Probably the best track on the album and that line is about the only one I can repeat here.  The theme continues with '''Deep Sexy Space''' (2'30) which is pure 160bpm Eurotrash verging into Gabba / Junglist territory.  _"There's just no kick with a little dick"_.  Well I never, there's no need to be like that.  The whole Deep Sexy Space thing is tenuously linked by preferring men to aliens.  They've obviously never watched 'Earth Girls Are Easy'.

'''Spank My Booty''' (3'52) tells the tale of a masochist who gets off on being spanked and it describes her tumultuous relationship with an 85 year old boyfriend who beats her.  _"Bleeding badly, it was love at first strike, but just the other day, I hit him right back, the poor old b*st*rd had a heart attack."_.  How we laughed.  Of course, it's utterly reprehensible and if there's a song designed to shock, this is the one.  I just found it funny if I'm honest.  Yeah, yeah, we've seen the whole sado-maso thing before.  Move along please.

'''The Power is Mine''' (4'22) - _"Come on boy obey me, lick my boots to please, maybe I'll let loose your chains"_.  I think she needs to make her mind up.  Only a few seconds ago, you were telling us how you like to be submissive.  Now, you're making us beg to lick your boots?  Haven't you heard of Kiwi shoe-care products?  Plus, Big Fat Gypsy Wedding is on and I don't want to miss that.  I know we've got Sky+ but love, take off that spiky leather thong you're wearing and let's have a nice cup of Horlicks eh?

'''You Belong To Me''' (9'40) - _"You can try and run away mother f**ker but I'll find you"_ kind of sets the tone for this darkly ominous tale of obsession, jealousy and all-consuming relationships.  _"Every single part of you, is mine, it belongs to me"_.  Steady on love, I only asked if you wanted to go for a coffee.  Call the Stalker Helpline and run, fast.  This track has a hidden song in it if you let it play long enough, at about the 5'40 mark.  It's all about horror films and very clever and rather chucklesome.  _"I wanna go, see a horror movie, Nightmare on Elm Street, how about it?"_.  Yeah alright then, I'm up for it.  Hang on, you're not going to do anything strange to me are you?  What's that spiky metal thing you're holding?  Ooh, saucy.

The words in brackets were an ironical attempt by Lords of Acid to be high-brow.  It totally isn't.

It's not for everyone, that's a certainty.  But how times move on, and rapidly too.  What was considered cutting edge and 'sexy' in the mid 90's would probably now be shown on Blue Peter.  If Rihanna had done her X-Factor routine on Top of the Pops in the 80's, Mike Reid would have had an anuerism.  Madonna's 'Erotika' album and subsequent 'Sex' book are all laughable now (well, they were at the time too but let's move on).

Unfortunately, Lords of Acid have also fallen victim to this exponential rise of a permissive and liberal society.  What might have been genuinely shocking, rude and / or (if you're a bit weird) sexy at the time, just comes across as forced, funny and faintly ridiculous.  Saying all that, Lords of Acid probably made this with studded tongue firmly in (most likely) studded cheek and unlike Madonna, they don't take themselves too seriously.

Jade 4 U is an accomplished singer and I find her voice to be quite sexy.  I wouldn't take her to meet my mother, of course.  The tracks fulfil their ambition of providing hardcore dance music but are quite listenable, certainly in the mode of Prodigy, Chemical Brothers and a slew of other 90's dance acts.  I'm a reformed raver myself but occasionally, I like to tune out of Classic FM and put some of these old-skool records back on the 'decks'.  Peter Kay says it well; "Put some of that Smack Yer Bitch Up on, yer mam loves that".  Street.  Except now it's "Put some of that Spank My Booty on, yer Dad loves some of that". 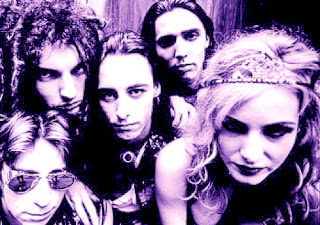 Can be found on Amazon for around £14.99 but shop around.

PS.  The album title, 'Our LIttle Secret' refers to the picture of the model on the cover.  It turns out 'she' isn't a female at all ...

Posted by PapasWorld at 7:38 AM