Wor Chezza, bless her.  Bouffant hairdo's, more talented co-judges (yes, even Paula Abdul and that's saying something) and an accent that's more bewildering to the Americans than a map of the World and the next thing you know, she's on the scrap heap of life, the phone-call has stopped ringing and the only form of consolation she's got is the millions upon millions of pounds she's accumulated through her varied pop career, personal appearances (this weekend at Netto in South Shields, Cheryl Cole will be here in person, signing autographed editions of her new perfume, 'Trollope') and full-frontal nudity in Hello magazine.  It's a sad indictment of todays day and age when frivolous and vacuous stories such as the shrinking economy, natural disasters and corporate greed push the real issues of the day off the front page.  Sir Cheryl Cole should be front page news everyday.

So, what's she going to do now?  Will her career ever resurrect itself like that of a phoenix, rising from the ashes of girly-pop group-dom and conquer the charts once again?  Or will she forever suffer the ignominy of walking down the street and no-one recognising her, being unable to get a last minute table at The Ivy or worse, appearing on Celebrity Pig Tossing on Channel 5?  What will happen to our English Rose? (well, nettle or dandelion at best).

She could always go back to Bananananararama and make records but where would the fun be in that?  Perhaps apologise to that cloak-room attendant for lamping her one?  Been there, done that, got the 'Magistrates do it in wigs' t-shirt.

No, what Cheriahanna needs now is a change of direction, something new to challenge all those talented freckles in her pretty little face.  Something that will bring her fans and admirers flooding back and one that will get her noticed again after being labelled a complete and utter talentless flop by the press and everyone else in the world, including her mam.  But, we all know she isn't a talentless hack and to prove it, she should show everyone what else her talents can bring apart from auto-tuned vocals, big hair, split-to-the-crotch trousers and punching cloak-room attendants in the face in a row over lollipops.

In my capacity as a former careers adviser (well, I told someone to Eff Off once and do you know what?  They did!), I thought it would be prudent and more than a little helpful to give Ms Cole a few tips, pointers and ideas in her next venture.  No thanks are necessary Cheryl, I'm doing it because I want to.

"Ah dinnae ken 'ow tah shovel this like pet", she'd say to her, erm, pets while desperately trying to keep her manicured nails in pristine condition.  Just think how many would turn up to the parrot display at 4 o'clock in the avarium?  She could teach the parrots to sing and then she could judge them before sending home the best ones and keeping the most risible in the competition.  It would be like the X-Factor all over again just with tropical birds, or as they say in Newcastle, 'Birds'.  Can you imagine a line-up of cockatiels all singing and dancing along to 'Sound of the Underground' by the Jackson 5?  I'd pay to see it, that's for sure. 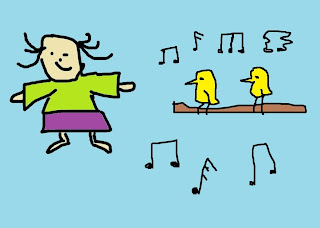 Donning a fake moustache, Chezza could easily pass herself off as a plumber.  Driving round in a white van all day, Girls Aloud blasting out of the blinged-up, pimped-up speakers, flagging off passers-by and angrily beeping the horn when she hit the slightest amount of traffic.  The message on her business answering machine would be '3 words for ya' - Cheryl Cole, Plumber'.  Thing is, you'd forgive her for the high prices and abusive language when she bent over and you got an eyeful of bum crackage as she pulled off, I mean OUT, your dishwasher.  It would make a refreshing change to Stinky Jim who is our current plumber of choice.  You can park a bike when he bends over, a motorbike that is.

"You lookin' at me like pet?", could be the new mantra as uttered by the Government when the Prime Minister is occasioned by visiting foreign dignitaries.  Also try, "Did you call arr pint a lass?" and, "There's only one Alan Shearer, there's only one Alan Shearer" before head-butting the King of Mesopotamia and clothes-lining his mistress.  We'd be like, well respected in da 'hood man.  At the G8 summit when all the other leaders are sipping their half-time cup of tea, David Cameron would take his shirt off and swirl it round his head shouting, "Come and have a go if you think you're hard enough".

Well, this is an obvious one so she may as well get it out of the way now instead of hanging about for a bit.  Prince Harry would be up for it I reckon, as would the Marquis of Bath.  Can you imagine registering the gift-list at Argos?  The Duke and Duchess of Grimsby has a certain ring to it.  Careful though, if you over-hear The Queen mentioning she wants to take you out, it's not to McDonalds for a happy meal, it'll be for a romantic drive through Paris.  Run, fast and far.

"Ah've got loadsa dosh me like pet burra dinnae kennae wannae spend it on the likes o' youse pet" she could say to the crestfallen moron trying to hawk his idea of a retractable, luminous and edible bow-tie to the den.  "You're nothing but a heartbreaker," said a depressed Herbert Loonytune, 48, from Scunthorpe.  The rest of the den roll their eyes and put their heads in their hands as Lady ColeCole takes this as a cue and gets up to perform 'Heartbreaker' to the panel of shocked billionaires.

Let's face it, she's got the accent for it.  All she has to do is make some random calls to 'customers', follow a script, sit back and watch the money roll in.  If she had to put anyone on hold she could sing to them live instead of playing some crappy pan-pipe rendition of 'Living in a box' by Living in a Box.  "Ayup pet, ahm calling abaht yurse phon' bill.  Yae dinnae ken keep ringing us like that pet.  Ah sez, yae dinnae ken ... hello?  hello?  ... Promise me this, ooh woah something woah promise me that" etc.

She's got the moves, she's got the punch, this one is almost a no-brainer.  Her in-ring name would be something dashing like 'The Great Suspendo' or 'Mega-Force' and she could wear skin-tight Lycra and a sparkly mask then get me in a head-lock and pin me down with her thighs until I ... I, erm ... sorry, I sort of got distracted there.  Yes, Professional Wrestler gets my vote.  Get me Max Clifford on the line right now.  Her entrance music would be ... wait for it ... it's really good this ... you're going to thank me later ... her entrance music would be 'Fight for this love'.  Ha ha!  Get it?  Fight?  Wrestler?  FIGHT for this love?  What's wrong with you?  Are you made of stone?  Bah, I'm wasted here me.

You know, the intrepid explorer chap?  Admittedly, this could be a tad difficult but with a smidge of make-up, a wig and a prosthetic nose, she could be whizzing across the frozen tundra of the Antarctic on a Skidoo faster than you can say, 'Gee up Neddy'.  If times got hard, as they invariably do when you're going somewhere no-one else has gone (think Selby, but warmer), for a change, she could always break into song.  The good thing is, there's no-one around to hear her warblings apart from some deaf penguins.  Everyone's a winner.  I amaze even myself sometimes.

You know, the 'music' 'mogul' and 'star' maker?  Admittedly, this could be a tad difficult but with a smidge of make-up, a hair cut and a prosthetic chest, she could be sat doing nothing all day while Sinitta massaged her temples dressed in a leaf costume.  Cheryl would have to have some special trousers made to reach up to her chin but that's do-able and once she's sat in the famous chair (is it a chair or a ladder?), she could sack the other Cheryl Cole who is now actually the real Simon Cowell dressed up to look like *her*.  Dannnnniiiii Minogue would dress up like Louis Walsh while he dresses like Jedward.  It all starts to get surreal when Jedward turn up dressed like Girls Aloud and then everyone starts singing the theme tune to the early-80's gritty drama 'Boys from the Blackstuff' in Alan Bleasdale week on the X-Factor.  Let's face it, it's no more freaky than an average Saturday night prime-time viewing is it?

All Cheryl has to do is publicly declare, "Ah've gorn orf blurks like 'n' ah prurfur burrds like me", lock lips with Louis Spence and she'll be back where she belongs at the top of the charts faster than you can say Katy Perry.  Only an idiot could come up this, I tell you.  Brainwave!  She could combine her lipsticking shenanigans with an appearance on late-night soft-porn channel, Bid Up TV where she can also flog her autobiography, 'It's a game of two halves by Kevin Keegan'.  Brilliant!  Sexy and frugal at the same time. 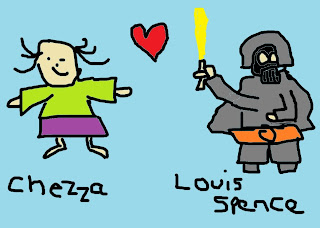 So there you have it, 17 new and fantastically awesome ideas that Cheryl Cole should definitely consider now she's retired.  I know there's only ten but I felt they were so good, several of them I counted twice.  Or, we could all get a sense of perspective and realise it's only a part-time talentless popstar / judge on a talent show that we're talking about here.

Posted by PapasWorld at 7:06 AM