Board Game Review: The Palace Extension

The Palace is an expansion set to the original Revolution! board game by Steve Jackson Games. 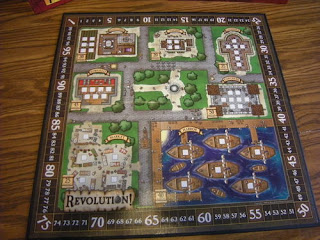 What's so good about it?

One of the main criticisms of the original Revolution! board game was the number of players - it could only be played by 3 or 4 people.  The Palace Expansion Set provides rules and counters for another 2, bringing the total up to a very sociable 6 players.  Due to the 'closed-bid' nature of the game, it can never work with less than 3 players, a problem not exclusive to Revolution! by any means.  This expansion also adds more options available to the player when bidding.

What's in the box?

A gameboard piece designed to fit over the redundant space in the middle of the original board.  Enough counters for a couple of extra players as well as 2 more screens.  6 new player boards as there are more spaces to place bids / bribes.  50 cubes (25 of each new colour).  A scant 2-page rulesheet.  The components, as per all Steve Jackson Games erm, games, are excellent.  The artwork, by Ben Williams is top-notch and everything is printed on thick card-stock meaning they will stand up well to repeated play.

How does it all work?

Revolution! is a game where players bribe certain members of a city in an attempt to increase their overall influence of said city.  Influence is represented by small, coloured wooden cubes.  For example, successfully bribing the Priest allows a player to influence the Cathedral, bribing the Captain allows influence to spread into the Harbour area and so on.  Each area of the city is worth a different amount of support 'points', awarded at the end of the game, depending on how many 'squares' of influence it has.

Be careful though, the bidding system is on a sliding scale and there are three methods of bribing.  Gold is beaten by blackmail which in turn is beaten by force.  Some members of the city can only be blackmailed (and won't be swayed by force) while others can only be forced and won't submit to blackmail.  Then there are 'rogue' elements such as Spies and Apothecaries that allow influence cubes to be moved around the board and/or swapped with other players'.  Bribing is achieved by the use of tokens which are granted by certain members and each turn brings a new and different set of tokens to assign.

The new gameboard piece of this expansion set represents the titular Palace and fits quite snugly over the old fountain graphic (that didn't do anything) in the centre of the original board.  The new player bid boards add an extra 4 options available when bidding.  These are:

Viceroy: Give them gold, blackmail or force your way into the Palace.  The Viceroy will also grant you access to the Guardhouse that stops you being affected by the actions of Spies or Apothecaries.

Messenger: Allows a player to reassign up to 2 of their influence cubes elsewhere on blank squares.  Messengers can be bribed with gold, blackmail or force.

Mayor: Only responding to gold, the Mayor allows you to place an influence cube in any blank square.

Constable: Possibly the most straightforward of the new playing options as buying a Constable with gold grants you 5 support points and a blackmail token for the next turn.

It sounds complicated but really, it's a very straightforward and easy game to play.  The extra rules are printed on the bid boards so there's none of the dreaded 'rulelookupiteus'.  There are hints also on the inside of the players' screens.  We found with extra players, there are more cancelled bids.  A cancelled bid happens when the same amount is bid by two players on the same square.  Obviously this increases the playing time.  With fewer players, the reverse happens as there are more options to choose from and hence less opportunity to queer another players pitch.  We can happily fit in a four player game inside a lunch hour, for example.

Strategically, the new bid options range from subtle to almost match-winning.  The new Palace building is hard to fill but is worth 55 points at the end of the game - the biggest building in the game.  The GuardHouse is also worth fighting for as it protects your existing influence cubes from the Spy and Apothecary and becomes very useful in the latter stages.  The Messenger and the Mayor are more subtle, allowing your own influence cubes to be placed in other areas.  These can be used to either strengthen the hold over a building or to surreptitously move into one held by another player.  Used together, they form a powerful alliance and can instigate a three-cube swing in any one area.  The Mayor is also useful in forcing the end of the game by allowing the last remaining influence squares to be taken up.

The Constable is perhaps the least effective, simply being there as a means of gaining an extra blackmail token for the next turn.  Our fears of too many blackmail tokens in play thus making the game imbalanced were ungrounded.  In fact, the game seems to have become more evenly balanced.  While my mate Tim *always* wins (he does look like Jesus so I reckon there's a bit of divine intervention going on), the scrap for second place is much closer.  As with any Euro-style game, the true winner is not determined until the final points tally.

For an RRP of £19.99, it's quite an expensive add-on for not a huge amount of components and with the original game at only £29.99, it's value is in question.  I can't help feeling this expansion set is the game that Steve Jackson wanted to release initially.  The ability to have up to 6 players is not something we have not had call to use on too many occasions.  Hardly ever, in fact.  A couple of evening meetings of our board game club and that's it.

But, the new rules *are* fun to play, are easy to pick up and *do* add an extra dimension to an already-interesting game.  With a much more regular 4 players, games seem more balanced and while Tim still wins, he's never massively in the lead as he seemed to with the original.

Posted by PapasWorld at 7:23 AM

Email ThisBlogThis!Share to TwitterShare to FacebookShare to Pinterest
Labels: board game review, expansion set, the palace